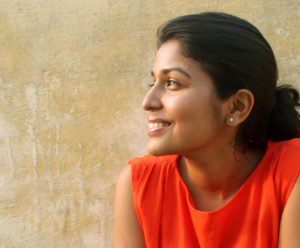 Devi Seetharam is an Indian artist, based in Melbourne, Australia. She completed her Bachelors in Fine Arts- Painting from LASALLE College of the Arts, Singapore 2011.

The opportunity of living in several different countries has moulded her outlook and informs her work. Devi primarily works with oil or acrylic paints on canvas using figurative visuals to portray social issues in the settings she inhabits.

Devi’s creative process has been dictated by her ever-changing physical space. Her works are a visual response of her understanding and absorbing of her current context and its inherent culture. Although her series are in response to a particular time and space, visually she would attempt to be culturally devoid to reinforce an empathic experience. In the past four years her works have incorporated more cultural cues as she explores her responses to being identified as a minority in the spaces she occupies.

She addresses unresolved issues while trying to highlight that it is a collective issue, not defined by political or cultural borders.

She has had both a solo show and numerous group shows held in Australia, Bahrain, France, Germany, India, Mauritius, Singapore, Switzerland, Taiwan, Thailand and UAE.

Devi currently works out of her studio at Parslow Studios.